Terry McMillian is the founder and chief operating officer of Funeral Video Service.  A 28 year veteran of the United States Marine Corps, Terry’s adult life has been focused on service to others, through a combination of people skills and technology.

As a civilian, Terry has taught career technology education classes in North Carolina public schools, where he was recognized as the state’s Technology Education Teacher of the Year in 2001. He has also worked for leading computer science and technology companies, focusing in areas such as robotics, advanced radio transmitter jamming systems to ensure the safety of our troops, and night vision devices and technology.

Terry’s vision for Funeral Video Service is to provide a meaningful tribute for families at the time of a loved one’s death.  The company’s video production service allows friends and family to have a keepsake of memorial services where the deceased is fondly recalled and recognized for a life well-led. The company’s streaming service makes it possible for individuals from distant locations to be a part of the memorial services.

As retired military, honoring and commemorating the lives and service of our veterans holds a special priority for Terry and the organization.  His familiarity with military memorial traditions and empathy for veterans and military families, make veterans’ memorial services a very important part of Funeral Video Service’s ongoing work.

Here to serve you.

Please contact Funeral Video Service at [email protected], 919-356-1624,  or by filling out this contact form. A member of our team will follow up with you promptly. Thank you. 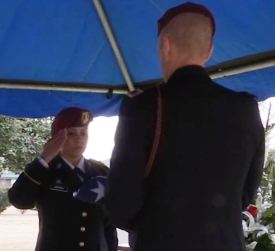